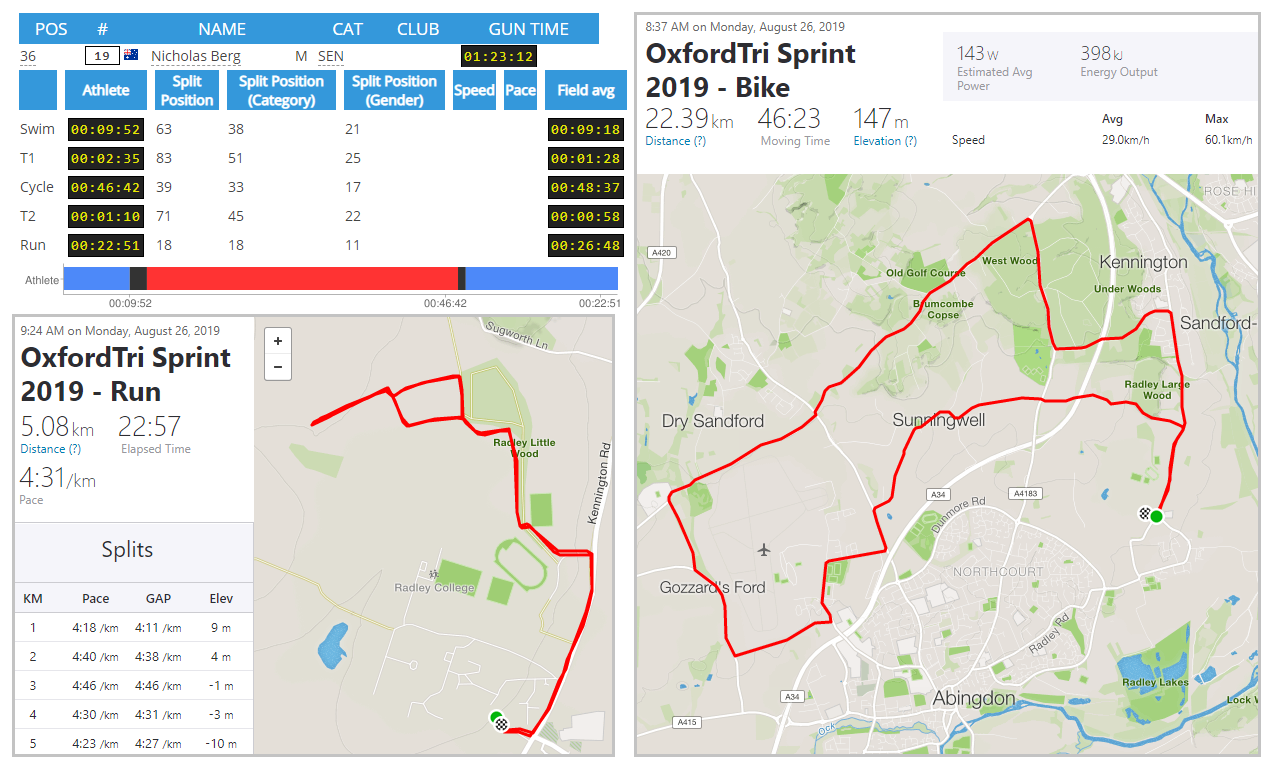 I generally like trying new things, and triathlon is one of the more popular activities I have never attempted. I have several triathlete friends in Oxford, and I enjoy the individual activities of swimming, cycling, and running, so it seemed likely I would enjoy the combination. Recently I cheered on a friend at the Cotswold Classic, and had previously done so at Ironman 70.3 Staffordshire, and in both cases felt inspired by the competitors to attempt a triathlon myself.

Currently I train for distance running, and am learning to row at City of Oxford Rowing Club. I regularly cycle as part of commuting. I have done almost no swimming this year, but am comfortable in water; most recently competing in an open water (ocean) swim in December 2018. In the lead up to the triathlon I ran significantly less than usual, but did approximately one hour of swimming two days before the race, checking I was able to swim the required distance continuously.

Triathlon requires a significant amount of equipment, e.g. this comprehensive list by fitness tech reviewer DC Rainmaker. Of that equipment, most of it is involved in cycling. My bicycle needed a significant amount of maintenance to be in a condition to race, taking about 8 hours of work. This included replacing both brake pads, brake cables and housings, gear cables and housings, cassette, chain, bottom bracket, tyres, and bar tape. It also involved cleaning out and lubricating the brakes and shifters themselves, as well as cleaning the rest of the bike. I was initially frustrated by how slowly I was making progress, but the final result was satisfying, and going from a bike in poor to good condition put a big smile on my face.

I swam in padded cycling shorts over swim briefs, goggles, and a swim cap. I had originally planned to swim in just the briefs and put the shorts on afterwards, but was discouraged by more experienced competitors (it is hard to put dry clothes on a wet person). I rode an entry level road bike (Triban 500) with clip in pedals. I ran in Nike Epic React Flyknit 2.

I was kindly provided with a race belt by the OxfordTri volunteer photographer.

Another novelty in preparing for the race was removing the hair from my legs:

“So there you have it—the secrets of my day at the wind tunnel. I saved 2–3 watts on my helmet and wheels, 5 watts with my arm position, 8 watts with my new kit. But the big winner was the 15 watts I saved by clear-cutting the forest off my lower legs.” – Jesse Thomas

I had been aware that cyclists shave their legs for two reasons: 1. when you crash it’s easier to keep the grazes clean and 2. it makes you go faster. Until this race, I had never tried it. It has been so long since I’ve done fast rides that I wasn’t able to notice any difference, but as a new bare-legged cyclist the 3 major differences I noticed were: 1. it was easier to apply sunscreen 2. my legs appear lighter in colour 3. I don’t recognise these shaved legs as my own when looking down on the bike; experiencing the odd momentary sensation that I must be looking at someone else’s legs. More discussion of the unexpectedly large impact of leg shaving in this article, and a video of the actual testing here.

Since I expected the race to take between 1 and 2 hours, I did not carb load. I had toast with jam before riding to the starting line. I took a glucose gel and water before the swim, and a glucose gel approximately halfway through the cycle.

It warmed up over the course of the event, starting at 12°C as I was leaving home and reaching 29°C by noon, by which time I had already returned. There was little wind, and no rain.

The swim was 16 lengths of a 25 meter pool. I was in the fourth wave of swimmers, each wave spaced 3 minutes apart. I swam freestyle. Initially I shared my lane with only one other slower swimmer, who I passed twice, and otherwise I did not notice the other swimmers who started after me. I felt that the bike shorts provided some extra buoyancy and made the swimming easier.

As well as being my first triathlon, this was my first bike race. I was excited riding out of the college, and then immediately concerned that I had missed the first turn. Thankfully the course was well signposted and I had set up a course map on my GPS head unit, so having found that actual first corner I was able to relax more. I was a little nervous about following rules, such as no drafting (following a cyclist ahead of you closely to have less wind resistance) and the compulsory foot downs (coming to a complete stop and putting a foot down before proceeding across an intersection), but these were probably products of feeling out of place in my first race. The marshalls were very helpful along the course, even encouraging me to not stop pedaling too early before the foot-downs. I was passed only once, and attempting to match the pace of that cyclist helped me push harder in the second half of the ride. Having started in an early swim wave, I was pleased to return to only a few bicycles on the racks, suggesting that I was making good time.

I was expecting running immediately after cycling to feel uncomfortable, however this was balanced out by the excitement of racing my most confident segment. The walk through the transition area and time changing my shoes also helped make the change less sudden. At an average pace of 04:31/km I was moving as fast as I could without significant discomfort, feeling similar to around 04:10 on a training run. I was passed by two or three competitors from later swim waves, and despite it being my strongest split I do not remember passing anyone in the run segment. I do remember being surprised by how many people were already out on the run course given how few bikes I saw at transition. I also remember fumbling a pose for the photographer (above).

The physical toll from the event felt similar to a moderately intense run of a similar duration. Aside from usual post-exercise rehydrating, eating, and stretching, I didn’t need any race specific recovery.

On the cycle home after the race, I managed to trap a wasp or bee under my wristband (used to match competitors with their bikes), and in trying to remove it was stung. The initial pain was surprisingly mild, slightly worse than nettles, and I was easily able to continue riding to a convenient place to stop and remove the stinger. Approximately 24 hours after being stung, however, I experienced swelling in my right hand, which continued for three days.

I am glad to have participated, but for now am returning to focus on running, with fast times at Blenheim and Oxford half marathons as my current goal. I’d also like to return to doing more strength training, and this would improve my erg times should I take rowing more seriously in the years to come.

Specifically for triathlon, the next step would be to compete in a sprint distance (longer 750 m swim but slightly shorter 20 km bike and 5 km run) or Olympic distance (1500 m swim, 40 km bike, 20 km run) race. With much more swim training, and becoming more comfortable in open water, I could then consider if I want to attempt the longer distance triathlons, and work towards them. There is something alluring about completing an Ironman event.

Some General Thoughts on Triathlons:

Any race event is possible only through the team behind it. Most of all I want to thank Gope Walker, for offering to help when he saw a new triathlete confused, sharing his equipment, and taking great photos. I particularly want to thank Dre and Jimmy for making my first encounter with triathlons so much fun, and thus starting off the process of actually trying one. Mike for keeping me training hard. Kimberley for helping me to be prepared. Gavin, Malcolm, Josh, Dan, Hugo, Stefan, Balaji, Haraman, Jonathan, Anas, and Sam; the FitONIees that inspire me to keep moving, and the RnD team for tolerating my impromptu absences to train. Finally a special thanks to Amadea and Oscar for encouraging me to keep writing.

If you enjoyed this, find more race reports from me here.